The proposed network architecture, which is named dueling architecture, explicitly separates the representation of state values and (state-dependent) action advantages. 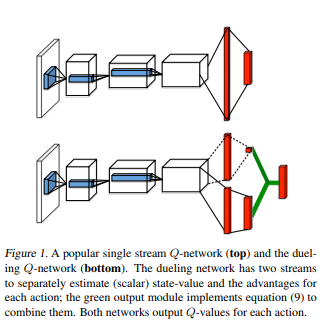 The dueling network automatically produces separate estimates of the state value function and advantage function, without any extra supervision. Intuitively, the dueling architecture can learn which states are (or are not) valuable, without having to learn the effect of each action for each state. This is particularly useful in states where its actions do not affect the environment in any relevant way.

The dueling architecture represents both the value $V(s)$ and advantage $A(s, a)$ functions with a single deep model whose output combines the two to produce a state-action value $Q(s, a)$. Unlike in advantage updating, the representation and algorithm are decoupled by construction.

The value function $V$ measures the how good it is to be in a particular state $s$. The $Q$ function, however, measures the the value of choosing a particular action when in this state. Now, using the definition of advantage, we might be tempted to construct the aggregating module as follows:

Unfortunately, the above equation is unidentifiable in the sense that given $Q$ we cannot recover $V$ and $A$ uniquely; for example, there are uncountable pairs of $V$ and $A$ that make $Q$ values to zero. To address this issue of identifiability, we can force the advantage function estimator to have zero advantage at the chosen action. That is, we let the last module of the network implement the forward mapping.

This formula guarantees that we can recover the unique $V$ and $A$, but the optimization is not so stable because the advantages have to compensate any change to the optimal action’s advantage. Due to the reason, an alternative module that replaces the max operator with an average is proposed:

Unlike the max advantage form, in this formula, the advantages only need to change as fast as the mean, so it increases the stability of optimization.

Carefully take a look at advantage and value layers separated from feature layer.

Here is a summary of DQNAgent class.

Aside from the dueling network architecture, the authors suggest to use Double-DQN and Prioritized Experience Replay as extra components for better performance. However, we don't implement them to simplify the tutorial. There is only one diffrence between DQNAgent here and the one from 01.dqn.ipynb and that is the usage of clip_gradnorm to prevent gradient exploding.

You can see the code and configurations of CartPole-v0 from OpenAI's repository.