How to predict catastrophic events ?¶

At the end of that short but preciser tutorial, you'll understand what is a GEV (Generalized extreme value distribution) and how to fit it on your data in python.

What we need to think about before speaking of extreme values statistics, is that in general statistics focus on average values and observable phenomenoms, for which we do have datas. Extreme values statistics is different from "average" statistics in this regard, indeed as we will see, we here try to model something for which we have no data! You will see soon what we mean by that. Before getting there I want to show you why extreme values modelling is an actual problem, of high interest for insurance companies and public services. Let's start with two examples.

3 hours of rain = 50% of total annual average. Montpellier is not known to be a city with a high annual rain level, located in the dry location of Provence, therefore if we look at the average value we have a very common one. But it is not excluded that sometimes, rarely, very high values appear, as we can see:

Unprecedented measured flows and precipitations in the twentieth century. Same problem here, this rivers has reasonable flows in average, but sometimes the flow can be exceptional.

Number of natural catastrophes since 1980 is growing 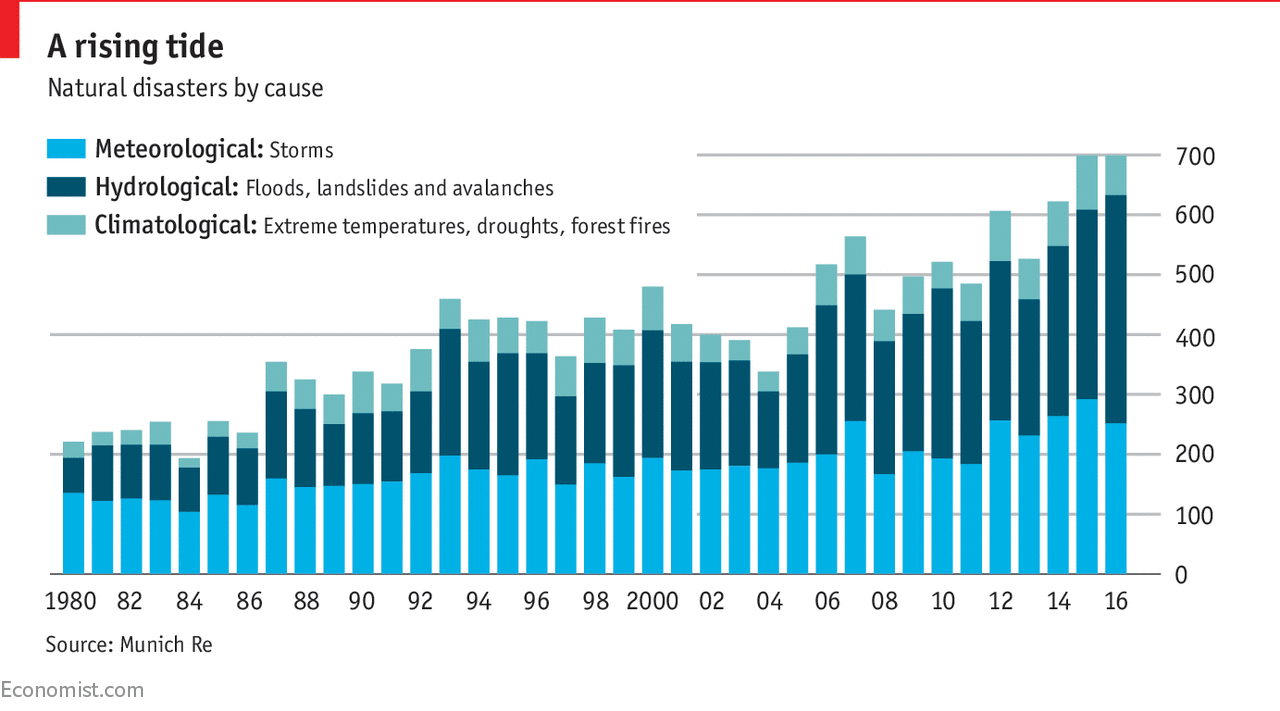 Question: What if we would like to quantify the probability of such events ?¶

As we said the particularity of the extreme value analysis is not to model an average phenomenom but an extreme phenomenom.

In order to understand what we mean by that, let's work with the Nidd river dataset here : https://www.stat.auckland.ac.nz/~wild/data/Rdatasets/csv/evir/nidd.thresh.csv, it contains $n=154$ trimestrial measures of the river's flows (in $m³/s$), over a period of 38.5 years (source: Natural Environment Research, 1975).

Let's plot a histogram of the data.

This is typically a problem where we cannot use the average value to represent anything, since most flows are under $80$ $m³/s$, and some are very high.

The step for the last bin represent one flow, this way we even can count visually the population in all the red bins :

Using our empiric data we compute this way the probability to have a flow superior to $160$ $ m³/s$, which tells us that we have a flow of this type in average every $3.5$ years.

Nothing unusual yet, right ?...

The answer is not satisfying, because it's surely not "impossible" to observe a flow superior to $400$ $m³/s$.

Partial Conclusion : we cannot estimate the probability of such a flow with the histogram!¶

And now we precisely get to what we talked about before, we want to compute the probability of an event for which we have absolutely no data, I hope this is clear now. In statistical modelling, usually, we train an algorithm with a dataset that is supposed to have the same distribution as the testing data, in other words we have datas for what we want to model. Extreme value theory comes into play here:

A "famous" joke illustrates this problematic: during the night, someone is squatting at the foot of a lamppost, and a passerby asks him: "What are you doing?" "I'm looking for my keys." "Are you certain that you lost them around the lamppost?", asks again the passerby. "No, but, in fact, that's the only lighted place."

The extreme values theorem can be seen as the analog of the central limit theorem. For a random variable $X$ and it's maximum over n observations: $X_{n,n}$.

If you have a random variable $X$ and study the distribution of it's maximum over a number of samples $X_{n,n}$, this distribution must belong and must "fall" in the domain of attraction of one of these 3 types of GEV.

We will use the genextreme class from scipy

This shape parameters tells us that the GEV is a Fréchet type, with a heavy tails, which means our river's flow can sometimes be very big, we better be careful and construct strong flood protections.

We can also answer questions like : what is the river's flow that we expect to surpass every century, because we also have the inverse of the survival function :

Here we computed the flow that we would get every 400 trimester, that is every century : $452$ $m³/s$! It's too bad these guys didn't follow my tutorial before:

What's not new yet:

Thanks for your attention ! God bless you!