Why Doesn't Italy Have Better Options?¶

We begin with Adam Tooze laying out the issues: 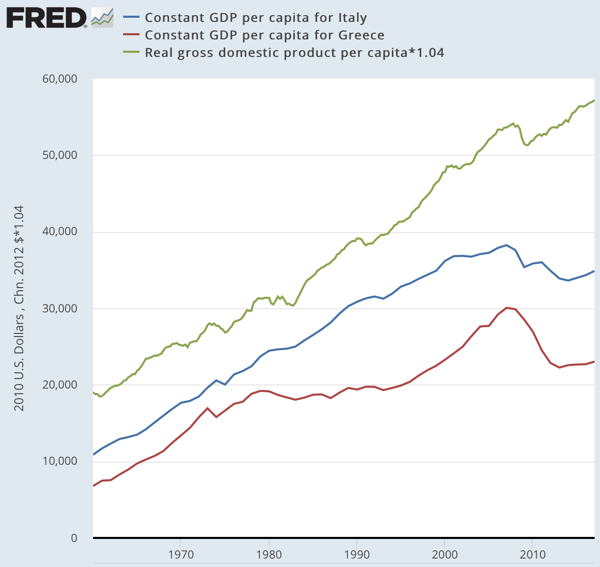 Adam Tooze: Italy: How Does the E.U. Think This Is Going to End?: "Over the past 10 years, Italy’s gross domestic product per capita has fallen... unique among large advanced economies...

...More than 32 percent of Italy’s young people are unemployed. The gloom, disappointment and frustration are undeniable. For the commission to declare that this is a time for austerity flies in the face of a reality that for many Italians is closer to a personal and national emergency....

The two parties that make up the current Italian government, the League and the Five Star Movement, were elected in March to address this crisis. The League is xenophobic; Five Star is erratic and zany. But the economic programs on which they campaigned are hardly outlandish.... The Italian government’s budget forecasts are optimistic. But others, including the Bank of Italy and the Peterson Institute of International Economics, warn that Italy is caught in a trap: Anxieties about debt sustainability mean that any stimulus has the perverse effect of driving up interest rates, squeezing bank lending and reducing growth...

What would have to be the case for a stimulus to have this perverse effect—to actually manage to not boost the economy but rather squeeze bank lending and reduce growth?

Our Filing System: The Basic IS Framework¶

Back in the late 1990s Paul Krugman concluded that workings of the macroeconomy had changed: that we had started to see The Return of Depression Economics https://books.google.com/books?isbn=039304839X. He was right. This meant that the economic analytical tools that had been forged in order to understand the Great Depression of the 1930s had become the right place to start any analysis of what was going on in the business cycle. And so it has proven to be for the past twenty years,

Therefore we start with John Hick's 1937 IS-Equation, from his article "Mr. Keynes and the 'Classics': A Suggested Interpretation" https://tinyurl.com/20181208a-delong. The variable we place on the left-hand side is aggregate demand AD. The variable we place on the right-hand side is the long-term risky real interest rate r. In between are a large host of parameters drawn from the macroeconomy's behavioral relationships and from salient features of the macroeconomic environment and macroeconomic policy. We identity aggregate demand AD with national income and product Y, arguing that the inventory-adjustment mechanism will make the two equal at the macroeconomy's short-run sticky-price Keynesian equilibrium within a few quarters of a year. 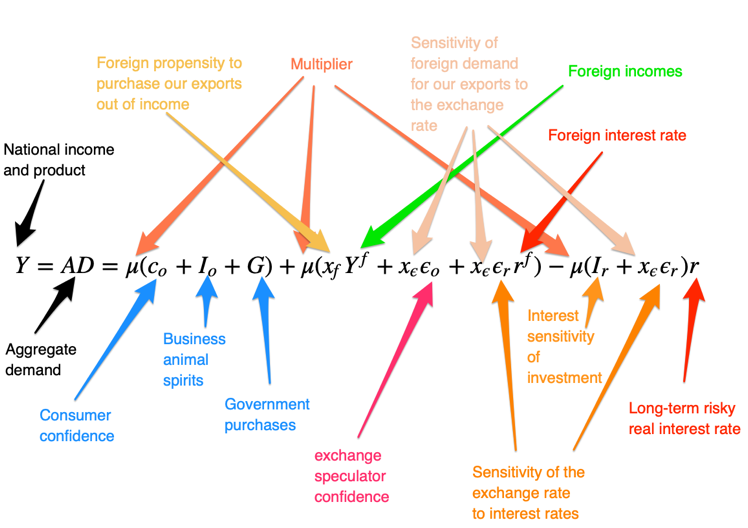 Then we have not so much a model of the macroeconomy as a filing system for factors that we can and need to model, thus:

To simplify notation, we will typically use "$\Delta$" to stand for changes in economic quantities generated by shifts in the economic policy and in the economic environment, and we will drop terms that are zero.

For the problem of understanding Italy today, the pieces of this equation that matter are:

Now we need an extra equation: a country with a freely-floating exchange rate $\epsilon$:

And the rewritten relevant parts of the IS equation are:

Thus the change ${\Delta}Y$ in national income and product that follows a fiscal expansion with higher government purchases ${\Delta}G$ will be positive as long as:

The shift to more expansionary fiscal policy will indeed boost demand, production, and employment unless this equation fails to hold.

What conclusions can we draw from this equation?

First, we conclude that taking on unsustainable debt—or rather debt perceived as unsustainable—could indeed fail to boost demand, production, and employment if the reaction ${\Delta}{\epsilon}_o$ to ${\Delta}G$ is too large. The natural thing, therefore, would be for the IMF and the European Union to step in with short-term support and guarantees to ensure that the market reaction ${\Delta}{\epsilon}_o$ coupled with a longer-term structural adjustment program to guarantee that debt repayment will in fact take place.

Second, that the European Union—which controls ${\Delta}r^f$—could assist by switching to an easier money-tighter fiscal policy mix itself and so creating a negative value for ${\Delta}r^f$.

If the past ten years ought to have taught the Great and Good of Europe anything, it is that ensuring prosperity, growth, and high employmennt is job #1. Figuring out how to dot the financial i's and cross the financial t's is distinctly secondary. But, as Adam Tooze writes, instead the Great and Good of Europe seem to wish to "hold the line on debt and deficits" without offering anything "positive in exchange, such as a common European investment and growth strategy or a more cooperative approach to the refugee question". He calls this, with great understatement, "a high-risk and negative strategy".

I cannot see how anyone can disagree.