Cenpy now has the slickest interface of any census data wrangling package out there. Query for what you want, wherever you want, using the placename that you're interested in:

Install it the prerelease candidate using:

I plan to make a full 1.0 release in July. File bugs, rough edges, things you want me to know about, and interesting behavior at https://github.com/cenpy-devs/cenpy! I'll also maintain a roadmap here.

Cenpy started as an interface to explore and query the US Census API and return Pandas Dataframes. This was mainly intended as a wrapper over the basic functionality provided by the census bureau. I was initially inspired by acs.R in its functionality and structure. In addition to cenpy, a few other census packages exist out there in the Python ecosystem, such as:

And, I've also heard/seen folks use requests raw on the Census API to extract the data they want.

All of the packages I've seen (including cenpy itself) involved a very stilted/specific API query due to the way the census API worked. Basically, it's difficult to construct an efficiently query against the census API without knowing the so-called "geographic hierarchy" in which your query fell: 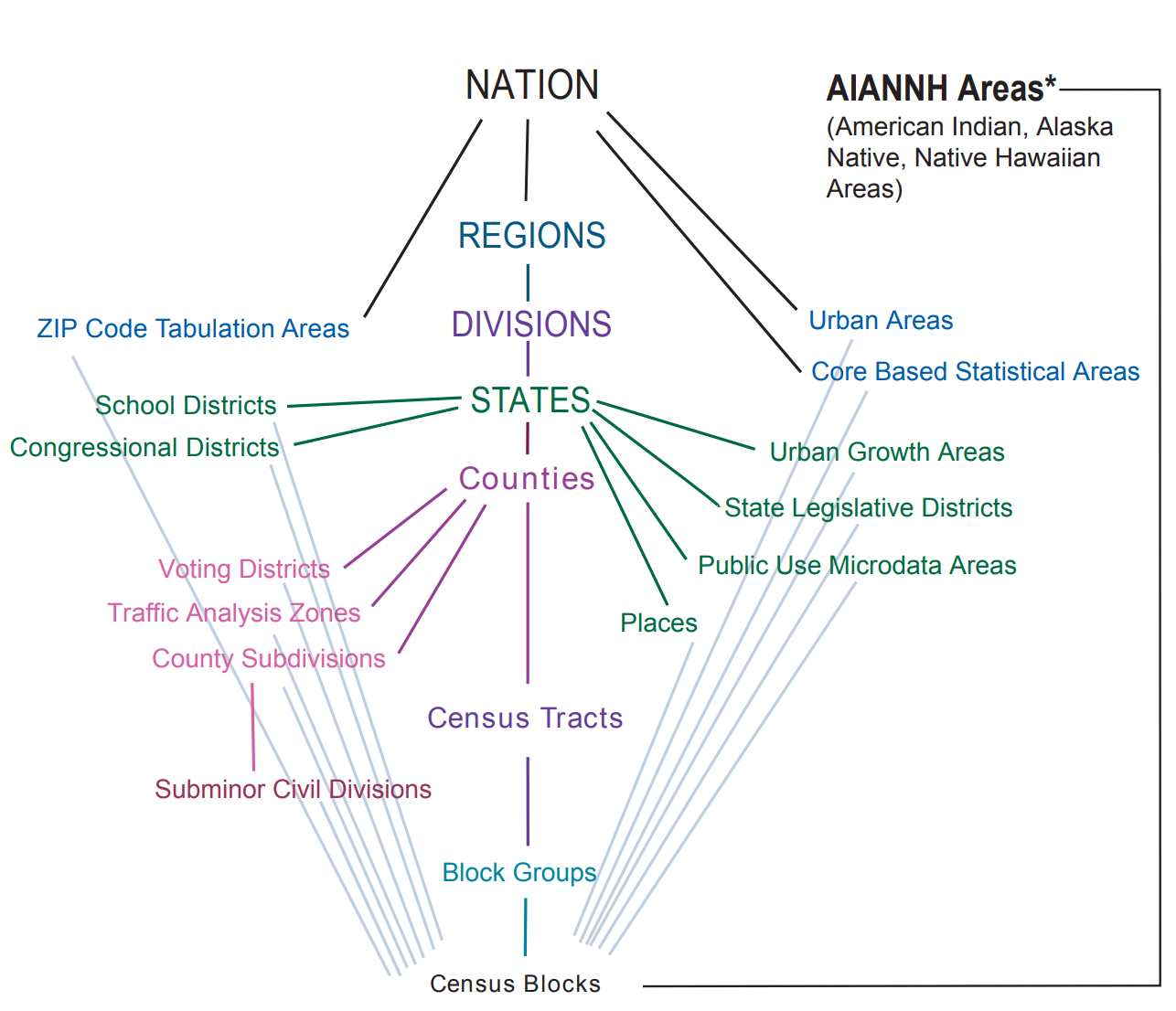 The main census API does not allow a user to leave middle levels of the hierarchy vague: For you to get a collection of census tracts in a state, you need to query for all the counties in that state, then express your query about tracts in terms of a query about all the tracts in those counties. Even tidycensus in R requires this in many common cases.

Say, to ask for all the blocks in Arizona, you'd need to send a few separate queries:

This was necessary because of the way the hierarchy diagram (shown above) is structured. Blocks don't have a unique identifier outside of their own tract; if you ask for block 001010, there might be a bunch of blocks around the country that match that identifier. Sometimes, this meant conducting a very large number of repetitive queries, since the packages are trying to build out a correct search tree hierarchy. This style of tree search is relatively slow, especially when conducting this search over the internet...

So, if we focus on the geo-in-geo style queries using the hierarchy above, we're in a tough spot if we want to also make the API easy for humans to use.

Fortunately for us, a geographic information system can figure out these kinds of nesting relationships without having to know each of the levels above or below. This lets us use very natural query types, like:

There is a geographic information system that cenpy had access to, called the Tiger Web Mapping Service. These are ESRI Mapservices that allow for a fairly complex set of queries to extract information. But, in general, neither census nor censusdata used the TIGER web map service API. Cenpy's cenpy.tiger was a fully-featured wrapper around the ESRI Mapservice, but was mainly not used by the package itself to solve this tricky problem of building many queries to solve the geo-in-geo problem.

Instead, cenpy1.0.0 uses the TIGER Web mapping service to intelligently get all the required geographies, and then queries for those geographies in a very parsimonious way. This means that, instead of tying our user interface to the census's datastructures, we can have some much more natural place-based query styles.

Let's grab all the tracts in Los Angeles. And, let's get the Race table, P004.

The new cenpy API revolves around products, which integrate the geographic and the data APIs together. For starters, we'll use the 2010 Decennial API:

Now, since we don't need to worry about entering geo-in-geo structures for our queries, we can request race data for all the tracts in Los Angeles County using the following method:

And, making a pretty plot of the Hispanic population in LA:

How this works from a software perspective is a significant imporvement on how the other packages, like cenpy itself, work.

Since the Web Mapping Service provides us all the information needed to build a complete geo-in-geo query, we don't need to use repeated queries. Further, since we are using spatial querying to do the heavy lifting, there's no need for the user to specify a detailed geo-in-geo hierarchy: using the Census GIS, we can build the hierarchy for free.

Thus, this even works for grabbing block information over a very large area, such as the Austin, TX MSA: