In 2014, :cite:Szegedy.Liu.Jia.ea.2015 won the ImageNet Challenge, proposing a structure that combined the strengths of the NiN and repeated blocks paradigms. One focus of the paper was to address the question of which sized convolutional kernels are best. After all, previous popular networks employed choices as small as $1 \times 1$ and as large as $11 \times 11$. One insight in this paper was that sometimes it can be advantageous to employ a combination of variously-sized kernels. In this section, we will introduce GoogLeNet, presenting a slightly simplified version of the original model---we omit a few ad hoc features that were added to stabilize training but are unnecessary now with better training algorithms available.

The basic convolutional block in GoogLeNet is called an Inception block, likely named due to a quote from the movie Inception ("We Need To Go Deeper"), which launched a viral meme.

As depicted in the figure above, the inception block consists of four parallel paths. The first three paths use convolutional layers with window sizes of $1\times 1$, $3\times 3$, and $5\times 5$ to extract information from different spatial sizes. The middle two paths perform a $1\times 1$ convolution on the input to reduce the number of input channels, reducing the model's complexity. The fourth path uses a $3\times 3$ maximum pooling layer, followed by a $1\times 1$ convolutional layer to change the number of channels. The four paths all use appropriate padding to give the input and output the same height and width. Finally, the outputs along each path are concatenated along the channel dimension and comprise the block's output. The commonly-tuned parameters of the Inception block are the number of output channels per layer.

To gain some intuition for why this network works so well, consider the combination of the filters. They explore the image in varying ranges. This means that details at different extents can be recognized efficiently by different filters. At the same time, we can allocate different amounts of parameters for different ranges (e.g., more for short range but not ignore the long range entirely).

As shown in :numref:fig_inception_full, GoogLeNet uses a stack of a total of 9 inception blocks and global average pooling to generate its estimates. Maximum pooling between inception blocks reduced the dimensionality. The first part is identical to AlexNet and LeNet, the stack of blocks is inherited from VGG and the global average pooling avoids a stack of fully-connected layers at the end. The architecture is depicted below.

The fifth block has two Inception blocks with $256+320+128+128=832$ and $384+384+128+128=1024$ output channels. The number of channels assigned to each path is the same as that in the third and fourth modules, but differs in specific values. It should be noted that the fifth block is followed by the output layer. This block uses the global average pooling layer to change the height and width of each channel to 1, just as in NiN. Finally, we turn the output into a two-dimensional array followed by a fully-connected layer whose number of outputs is the number of label classes.

The GoogLeNet model is computationally complex, so it is not as easy to modify the number of channels as in VGG. To have a reasonable training time on Fashion-MNIST, we reduce the input height and width from 224 to 96. This simplifies the computation. The changes in the shape of the output between the various modules is demonstrated below.

As before, we train our model using the Fashion-MNIST dataset. We transform it to $96 \times 96$ pixel resolution before invoking the training procedure. 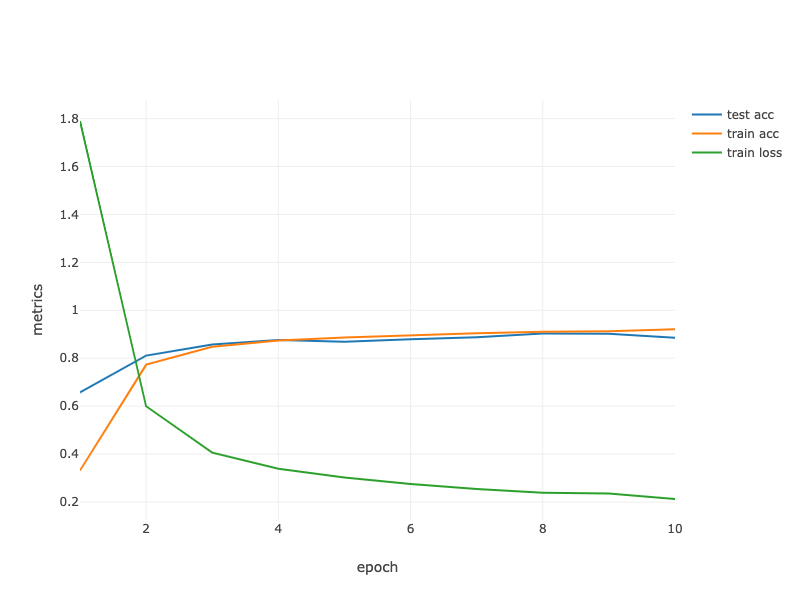