I am really looking forward to your comments and suggestions to improve and
extend this little collection! Just send me a quick note
via Twitter: @rasbt
or Email: bluewoodtree@gmail.com

Day 10 - One Python Benchmark per Day¶

Cython - Bridging the gap between Python and Fortran¶ 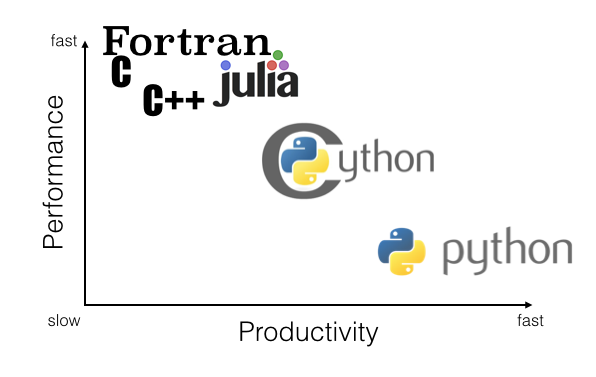 (Note that this chart just reflects my rather objective thoughts after experimenting with Cython, and it is not based on real numbers or benchmarks.)

For this benchmark, we will implement a naive least squares method for linear regression, which is the simplest approach to performing a regression analysis of a dependent and a explanatory variable.

The objective is to find the best-fitting straight line through a set of points that minimizes the sum of the squared offsets from the line.
The offsets come in 2 different flavors: perpendicular and vertical - with respect to the line. 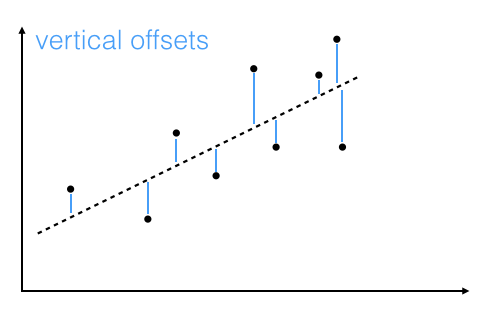 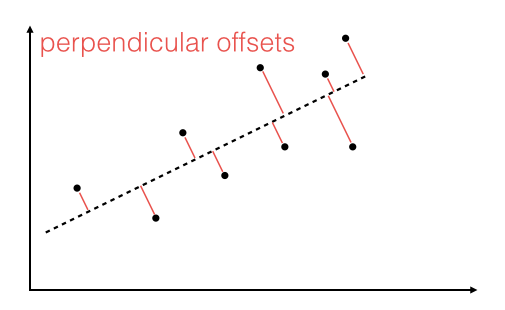 As Michael Burger summarizes it nicely in his article "Problems of Linear Least Square Regression - And Approaches to Handle Them": "the perpendicular offset method delivers a more precise result but is are more complicated to handle. Therefore normally the vertical offsets are used."
Here, we will also use the method of computing the vertical offsets.

In more mathematical terms, our goal is to compute the best fit to n points $(x_i, y_i)$ with $i=1,2,...n,$ via linear equation of the form
$f(x) = a\cdot x + b$.
We further have to assume that the y-component is functionally dependent on the x-component.
In a cartesian coordinate system, $b$ is the intercept of the straight line with the y-axis, and $a$ is the slope of this line.

After I experimented with different libraries, the numpy functions, and other tweaks, I decided to go back and implement the least squares fit method in (C)Python without any external libraries - using just the pure standard lib. Python.

For Cython and Fortran, we will be using NumPy arrays for more efficient memory access.

Cython (see Cython's C-extensions for Python) is basically a hybrid between C and Python and can be pictured as compiled Python code with type declarations.
Since we are working in an IPython notebook here, we can make use of the very convenient IPython magic: It will take care of the conversion to C code, the compilation, and eventually the loading of the function.
Also, we are adding C type declarations; those type declarations are not necessary for using Cython, however, it will improve the performance of our code significantly.

Thanks to Joshua Adelman and Andreas Mayer for pointing out some flaws in the initial version of the Cython implementation.

Upon request I added the untyped version (identical to the (C)Python implementation) for comparison below:

Just for a visual cheeck for how our dataset is distributed, and how the least squares regression line looks like, we will plot the results in a scatter plot below.

Note that we are only using our "matrix approach" to visualize the results - for simplicity. We expect all 3 approaches to produce similar results, which we confirmed in via the np.testing.assert_array_almost_equal function above.

Now, finally let us take a look at the effect of different sample sizes on the relative performances for each approach.

Preparing to plot the results¶

Of course it is not fair to compare the interpreted Python language to compiled C and Fortran code that have static types at compile time.
Here, I was mostly interested to see how the code compiled code via Cython stacks against Fortran via F2PY (of course different compiler version can also cause significant differences). And one can say that both are about equal in terms of performance (at least for this simple benchmark).

It is nice to see that Cython and Fortran code can be used quite conveniently in IPython notebooks, which make them a even more valuable tool for data analyses and algorithm development: Code can be prototyped in Python, and step by step rewritten in context of the original documentation.
In the case of Cython, it is especially nice that Python and C functions can be mixed and matched to get the best out of both: Productivity and code efficiency.