This notebook is based on a project assignment [1] given in the course TMA4320 Introduction to Scientific Computation at NTNU, spring 2017.

It is probably well known that the Norwegian Meteorological Institute produces a weather forecast, predicting the weather several days into the future. This weather forecast includes a vector field of air velocities at 10 m elevation above the ground, commonly known as “the wind”. Less well known is that they also produce a forecast for the ocean, which includes a velocity field describing the ocean currents about two days into the future. In the event of an oil spill at sea, this informationcan be used to predict where the oil will end up, which in turn can be used to direct response operations to try to minimise the damage. During for example the Deepwater Horizon oil spill in the Gulf of Mexico in 2010, numerical simulations were used daily to predict what would happen over the next few days.

The goal of this notebook is to simulate transport of matter by ocean currents. While oil spills at sea are relatively well known from media coverage, it is by no means an easy task to simulate what happens. Oil spilled at sea displays quite complex behaviour: it can form droplets submerged in the water, continuous slicks at the surface, it will partially dissolve, partially evaporate and partially biodegrade, and it can form stable oil-in-water emulsions, all of which will significantly alter its properties. For these reasons, we will study the simpler case of transport of a dissolved chemical. A dissolved chemical will move in the same way as the surrounding water, without sinking or rising due to differences in density.

We will study the transport of dissolved chemicals in the ocean using a particle method. We will read data which are provided by the Norwegian Meteorological Institute (MET), interpolate these data and use them to calculate trajectories. We will also plot positions and concentration fields on a map, using various python library packages.

We assume that the presence of the particles don’t affect the motion of the water, so we can take the velocity of the water as a given.

We also assume that the particle always moves with the same velocity as the water. This is essentially the same as saying the particle has no inertia. In this model, if you give the particle some velocity, and release it, the motion will immediately be damped, due to friction against the water. It is therefore called the overdamped limit. This model is described by the ODE

When the drag coefficient between the water and the particle is large, the overdamped limit is a good approximation.

In this example, we will use pre-calculated ocean current data to tell us the velocity of the water, $\textbf{v}_w$, as a function of $\textbf{x}$ and $t$. The oceanographic data are produced by MET, and they are the results of running a numerical simulation engine known as ROMS, on a model domain known as NorKyst800m. It provides information about current velocities, water temperature and salinity for an area covering the entire Norwegian coast, at 800m × 800m horizontal resolution, with 12 vertical layers, and with a time resolution of 1 hour.

The data are available for download as NetCDF [2] files, or the data can be accessed via OPeNDAP [3]. NetCDF is a file format for storing data in arrays. It is quite well suited for medium to large amounts of data (up to 100's of gigabytes in a single file works fine), and it is very commonly used for geographical data, such as ocean or atmosphere data. In order to access the data, we will use the python library xarray [4].

The data files contain the $x$ and $y$ components of the velocity field, stored in two variables named $u$ and $v$ (it is quite common to store only the horizontal components of the current velocity). These variables are stored as rank 4 arrays, which give their values as a function of time, depth, y position and x position (note that the order of the dimensions in the files is $(t, z, y, x)$). The coordinates of the grid points along these dimensions are also stored in the data files, in the variables $time$, $depth$, $Y$, and $X$. For simplicity, we will ignore the depth dimension, dealing only with movement in the horizontal plane, and time.

The dimensions $x$ and $y$, as shown in Fig. 2, are the coordinate axes in what is known as a polar stereographic projection of the Earth’s surface onto a plane. For the purpose of this project, we will deal with motion in the $xy$-plane, with coordinates as shown. As the vector components of the velocity field are aligned with these coordinate axes, we can use the components directly to calculate motion in the $xy$-plane. This means that for the transport simulations, we will ignore the curvature of the Earth. In the end, we will see how to transform from $xy$-coordinates to longitude and latitude, and plot the particle positions on a map.

Figure 1: The domain of the NorKyst800m model, showing surface water temperatures on February 4, 2017. 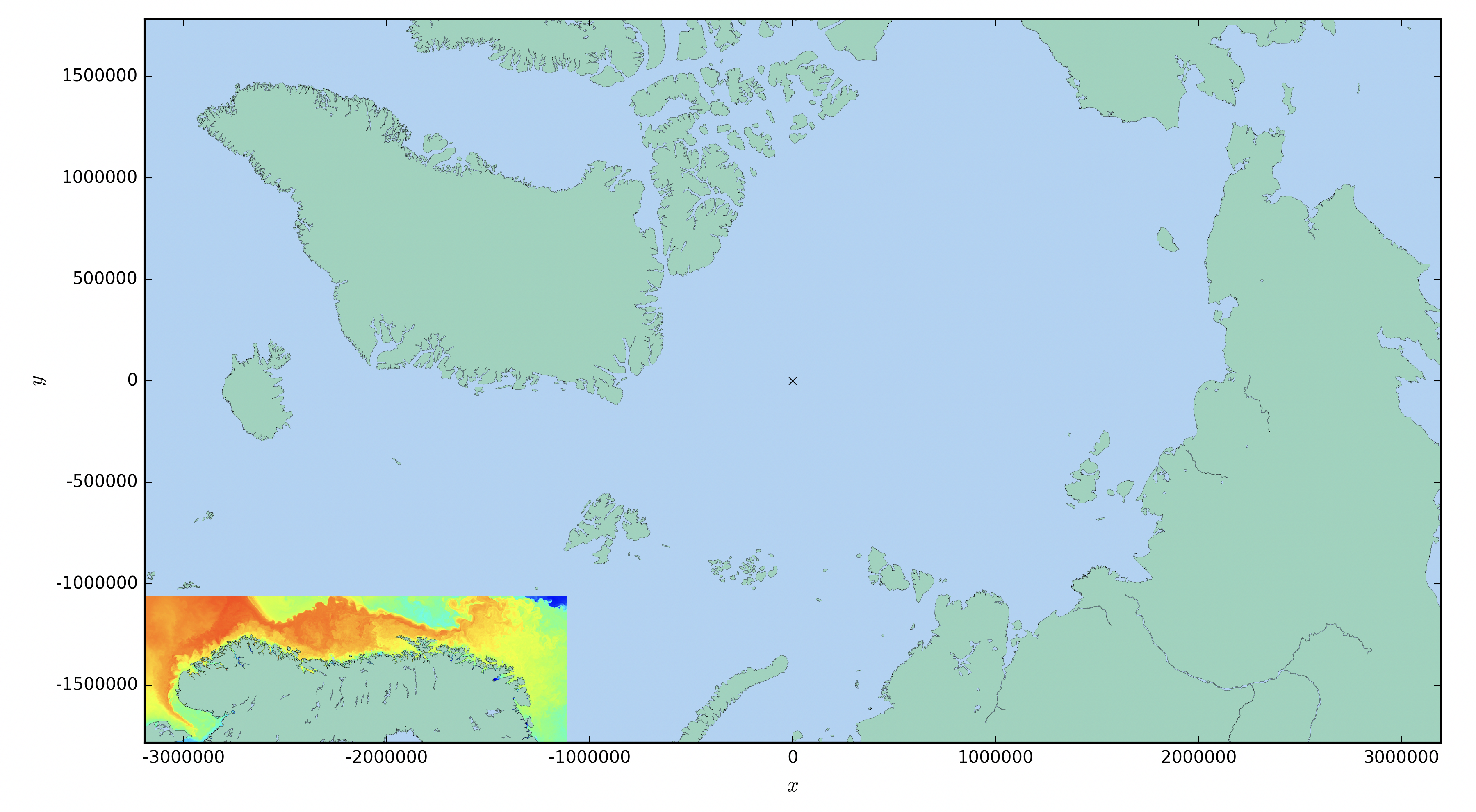 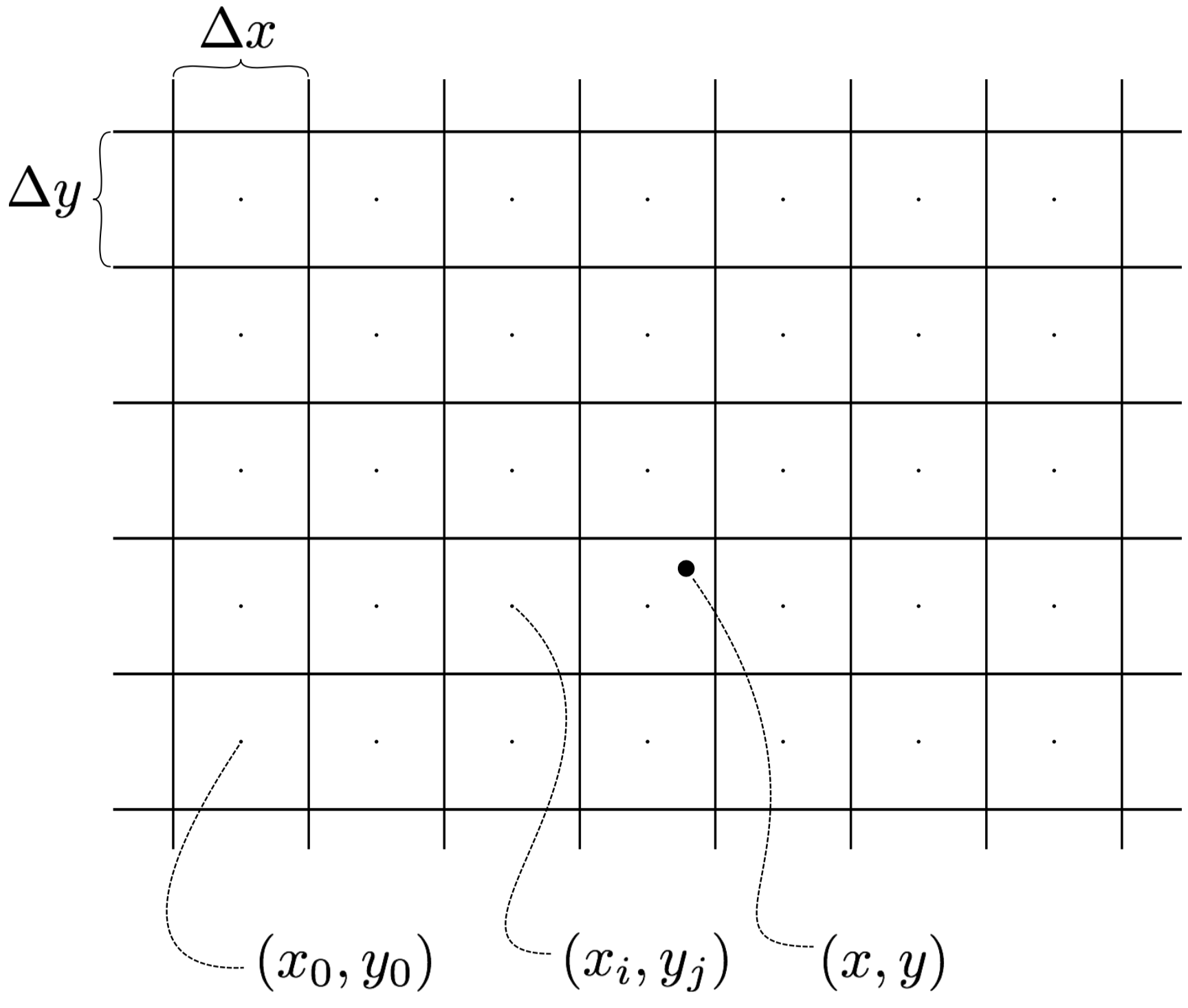 Figure 3: Velocity vector components are given only on discrete points, $(x_i, y_j) = (x_0 + i\Delta x, y_0+j\Delta y)$. In order to calculate trajectories, we need to evaluate the velocity at arbitrary positions $(x, y)$

After calculating how the particles are transported with the ocean currents, we will plot their trajectories and positions on a map. There are two main libraries in use to plot data on maps with python, basemap and cartopy. In this example, we will use cartopy [5], which is slightly easier to use. cartopy is a Python package designed to make drawing maps for data analysis and visualisation as easy as possible.

When moving particles around with the water velocity, we will use the coordinate system shown in Fig. 2. For plotting trajectories, it is straightforward to just use those coordinates directly, which will show distances in meters. However, if we want to show the trajectories on a map, we need to convert from the $xy$ coordinatesystem of the polar stereographic projection, to longitude and latitude. We will use a library called pyproj [6]. This Python package performs cartographic transformations and geodetic computations. The class pyproj.Proj can convert from geographic (longitude, latitude) to native map projection $(x,y)$ coordinates and vice versa, or from one map projection coordinate system directly to another.

We want to represent the transport of a dissolved chemical in the ocean, by simulating the motion of a large number of particles. A particle’s trajectory is controlled by Eq. \eqref{eq:1}, where $\textbf{v}_w$ is taken from the ocean current data. The prepared datafile Norkyst-800m.nc containins 20 days of data spanning from February 1 to February 20, 2017. The file is available for download here:

To propagate the particles we use the Explicit Trapezoid Method as an integrator. The timestep is set to $h = 3600$ s and since the data is provided at intervals of one hour, no interpolation in time is needed.

We will now do the following:

As an in-memory representation of the NetCDF-file, Norkyst-800m.nc, we use the xarray data structure xarray.dataset. It is a dictionary-like container of labeled arrays with aligned dimensions. Its dictionary-like interface can be used to access any variable in the dataset. Read more about xarray.dataset here.

In this example the $x$ and $y$ components of the velocity field are stored as u and v and the grid coordinates as the arrays X, and Y. The time variable time is stored as a datatime64 type. An array of specific velocity component values at the grid coordinates $(x_0, y_0), ..., (x_i, y_i)$ is returned by running dataset.u[time, depth, y0:yi, x0:xi].

To interpolate the velocity $\textbf{v}_w$ to an arbritary point $(x, y)$ on the $xy$ coordinate system, we use the class RectBivariateSpline from scipy.interpolate, as discussed earlier. This is implemented in the class Interpolator, as defined beneath. Interpolator has the datafile representation dataset as a member variable.

To solve the ODE $\eqref{eq:1}$, we need an integrator. In this example we make use of The Explicit Trapezoid which is a second-order Rung-Kutta method.

Finally, we define a function to calculate the trajectory of the particles.

The array X1 now contains the $xy$ coordinate for each of the $N_p$ particles at each time $t$. It has the dimensions (Nt, 2, Np). Now, we are able to plot the particles on a map at any time we want, as well as counting the concentration of particles in a defined grid system. To create a figure with stereographic projection we use ccrs, to add coastlines and other features we use cfeature, and to transform the cartesian coordinates to longitude and latitudes we use pyproj.

As expected, the results shows that the chemical trajects rather collectivly, with little deformation of shape during the first four days. We see that the group moves mainly northwards. The small spreading indicates only slight local differences in the ocean current.

The coordinates of the particles are already stored in the array X1. We now only need to define the grid system and count the number of particles in each grid cell. The latter is stored in the two dimensional array counts, where each element represents the concentration of the chemical to the corresponding 800m × 800m grid cell. The concentration is then illustrated by plotting a quadrilateral mesh using the matplotlib.axes function pcolormesh. Grid cells with the lowest concentration are coloured purple, and grids with the highest concentrations are coloured yellow. A masked array is used to only plot those cells with nonzero concentrations.

The function plt.pcolormesh() basically plots each element of a 2D array as a tiny rectangle. For each tiny rectangle, it needs to know three things: $x$-coordinate, $y$-coordinate, and value. The values are the counts. The coordinates must be transformed from 1D arrays to 2D arrays, of the same shape as the counts. For this, np.meshgrid is used. To count the particles in each grid, we use the numpy function np.histogram2d. As parameters this function needs the $x$ and $y$ coordinates of the points to be histogrammed, as well as a bin specification, which in this case is the extent of the grid system.

For a closer look at the concentration after ten days, we change the extent.

We have now succsessfully completed a simplified simulation of the movement of a chemical for a period of ten days after a spill, using a representation by numerical particles and assuming the particles moved with the same velocity as the water.

The particles were transported by the ocean currents retrieved from a NetCDF-file and represented in an xarray. The gridded velocity components of the current were interpolated using a scipy-function, and the trajectory of the numerical particles were calculated using the Explicit Trapezoid Method as integrator with a time step of an hour.

Finally, the position and the concentration of the oil were plotted on a map using the Python packages cartopy and pyproj.