In a series of laboratory sessions in a physics course at NTNU, the students are studying the rolling motion of objects on a curved track. Due to the curvature, the velocity and acceleration will vary. The students uses a high speed camera to record the motion and compare the results with numerical simulations.

In this notebook, we will simulate a rolling ball on some arbitrary track in two dimensions by solving Newton's second law. The track is made by performing cubic spline interpolation on a set of points. The setup will be based on the setup used in the aforementioned laboratory sessions. For more information, see [1].

An object, such as a ball, is rolling on a curved track. The rotation axis passes thorugh the center of mass. Let $m$ be the mass, $r$ be the radius of the ball and $I_n$ the moment of inertia. The forces on the center of mass is described by Newton's second law 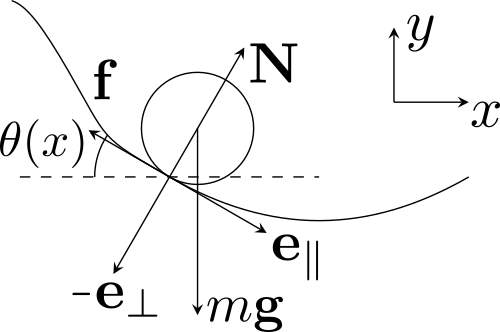 Figure 1: A cylinder or sphere is rolling on curve $y(x)$. The forces acting on the object are indicated on the figure. At each point $x$, the slope of the curve is defined by an angle $\theta(x)$.

where $R(x)$ is the radius of the curvature and $v$ is the speed (along the track). Thus, we obtain the two equations

The first equation describes the motion parallel to the track, while the second equation yields, with $N\geq 0$, a condition for when the ball loses contact with the surface.

An expression for the friction is found by using Newton's second law of rotation,

The friction $f$ is the only force that do not pass through the rotation axis, and is thus the only force that contribute to the total torque $\tau$. The friction acts on the object a distance $r$ from the rotation axis (and at an angle $\pi/2$), so that $fr = I_0 \omega$. The ball is assumed to roll without any gliding. By using the rolling condition $v=\omega r$, equation \eqref{eq:parallel} can be written as 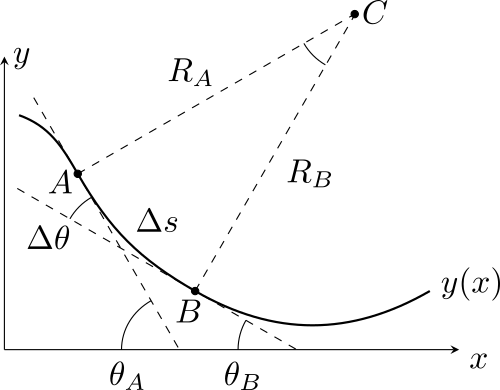 Figure 2: Sketch used to describe curvature and the radius of the curvature. (Taken from [1])

Consider now a infinitesimal arclenth $\Delta s \to\text{d} s$. From the figure one can see that

The differential $\text d s$ is given by

The curvature can thus be written as

and the radius of the curvature becomes

The track is made by a plastic bar which is attached to a solid frame at $N=8$ different mounts, as shown in figure 3. Let $(x_i, y_i)$ be the position of the $i$th mount. The $x$ positions are fixed and uniformly distributed across the frame. We will assume that the frame has a length $L=1.4\,\text{m}$, such that the distance between the mounts is $l = 20\,\text{cm}$. The $y$ positions can be changed.

The track can be described by a cubic spline that interpolates $(x_i, y_i)$. The cubic spline consists of a set of cubic polynomials that has continuous first and second derivaties at the interpolation points. See our notebook on Cubic Splines for a general discussion. We will be using the function CubicSpline from scipy.interpolate to perform the interpolation. This creates a callable class, which we can treat as a function $y(x)$ that describes the track.

As we saw earlier, $\theta$ and $R$ depends on $\text dy/\text dx$ and $\text d^2y/\text dx^2$. The class CubicSpline has a function called derivative which returns a class PPoly, which essentially is the derivative of the spline. PPoly has also a function derivative. We can thus easily compute $\theta(x)$ and $R(x)$ by using equations \eqref{eq:theta} and \eqref{eq:R}.

We are assuming that there is no loss of mechanical energy. Thus, if the highest point of the track is $y(x=0)$, then the ball will fall of to the right. If this is not the case, the ball will roll back and forth.

We start by assuming that the ball is always in contact with the track. Equation \eqref{eq:vdot} yields a coupled set of ordinary differential equations (ODE)

where $v$ is the momentary velocity along the track. The $x$ position is in turn given by

$v(t)$ and $x(t)$ can be found by applying a method for solving ODEs, such as an Euler method, a Runge-Kutta method or a more advanced addative method. We refer you to the respective modules or an example that solves an ODE at numfys.net. In this notebook we will be using the 4th order Runge-Kutta method.

We choose $x=0$ and $v=0$ as initial conditions, and a time-step $\Delta t = 10^{-3}\, \text{s}$. We have assumed that the ball do not loose any mechanical energy. One method of checking whether the numerical computation gives realistic results is to check if the total mechanical energy

Everything is now set to roll the ball down the track.

The relative change in the mechanical energy was minimal, which means that the time step was more than small enough. The ball used $1.07\,\text{s}$ to reach the end of the track.